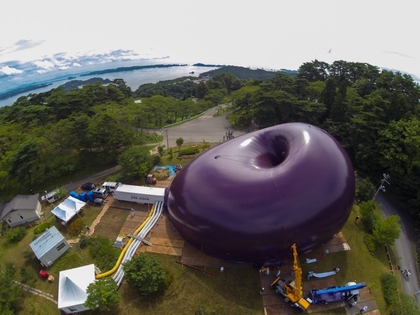 The world's first inflatable concert hall is a new work by Anish Kapoor in collaboration with the Japanese architect Arata Isozaki and Lucerne Festival. This project was created in response to the devastation brought by the 2011 tsunami, which badly affected much of the region around Matsushima.

Mr Kapoor told the Telegraph: “Ark Nova is the first mobile inflatable concert hall. We felt that the site in Matsushima, amidst the destruction of the tsunami, needed a temporary structure and an inflatable seemed to be appropriate.” He went on to say: 'I worked in close collaboration with Arata Isozaki’s studio in Tokyo, and with Aerotrope, a Brighton-based engineering firm with which I have worked closely on many projects,’ he explained. 'Aerotrope led the design from the structural perspective, and Mr Isozaki’s team made and delivered Ark Nova.’

Ark Nova will tour a programme of traditional and contemporary classical music, in order to make a contribution to people's efforts in overcoming the consequences of the catastrophe.

For more design and technical details follow this link to our ARK NOVA CASE STUDY.