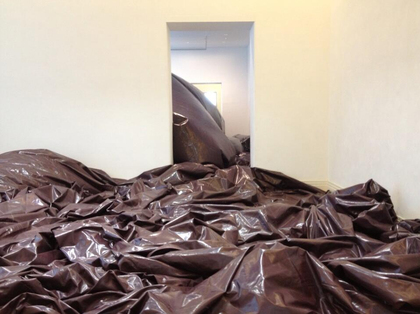 For the Martin Gropius Bau Kapoor envisioned a deflated version of a previous work, 'Leviathan', which had occupied the nave of the Grand Palais in Paris in 2011. The material now fills 3 adjacent rooms of the Gropius Bau.

For the Berlin exhibition the challenge was to place the material, PVC-coated polyester, inside a much smaller gallery. For this our engineers first prepared a scaled down model of the inflatable, to understand how the material should be best packed to fit into the gallery space. A certain way of folding had to be devised in order to achieve the form the artist desired as the final shape. What we learned from experimenting with the scale model was then implemented with the full scale inflatable.

Aerotrope designed an inflation system that is able to maintain constant low pressure over months. Alberto Martinez finally oversaw the installation of this piece into the gallery in collaboration with Hightex, the inflatables' fabricators.

Here is a photo of the final work, which Kapoor named 'Death of Leviathan'.