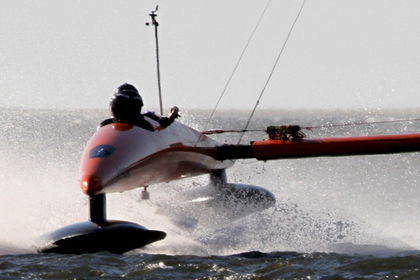 Another day, another record! On Sunday evening 18 November Sailrocket 2 set a new Nautical Mile record by averaging 55.32 knots and 63.98 knots peak (subject to wssrc ratification). A nautical mile is defined as the average length of one minute of one degree along a great circle of the Earth, otherwise known as 1,852 meters. Achieving this under conditions in Walvis Bay was no mean feat, says pilot Paul Larsen: “I have to wind the boat up in rough water at the start and launch it out into rough water at full pelt at the end.”

Vestas Sailrocket 2 is continuing her campaign to rewrite sailing history.  What a week! On Monday she broke the class B record with 53.1 knots average. 3 hours later pilot Paul Larsen smashed the 60-knot “sound barrier” and Sailrocket became the fastest sailboat ever over a distance of 500 metres, clocking in at 54.08 knots average. A couple of days without wind ensured that by Friday Sailrocket 2 was hungry for more: She smashed the outright world record, raising the bar at once by 3.58 knots (biggest ever jump) to 59.1 knots average. Much champagne followed so Saturday no sailing got done. Come Sunday the team aimed for and claimed the Nautical Mile record first time! Wow.