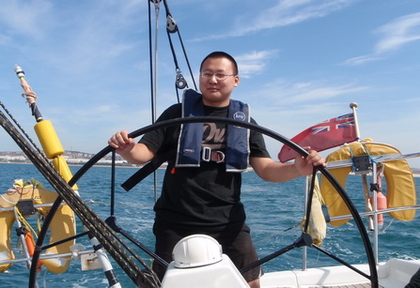 Wang Feng joined Aerotrope in 2008. He is a qualified Aeronautical Engineer with a MSc in Aircraft Vehicle Design from Cranfield University

As well as a BSc (same subject) from BUAA Beihang, China. Besides working on blade engineering for our wind energy clients Wang Feng is part of the team that developed Sailrocket II.

Q: Wang Feng, you are part of the 'brains trust', as Sailrocket pilot Paul Larsen calls the design team on his blog. Can you explain your job within the team?

I joined the team when they developed several concepts for a new boat, VSRII. I took part in the concept selection and then Aerotrope designed the new fuselage and wing. We also trialled an early model version (see WF in action).  I also wrote a performance prediction programme that ensured we would avoid any stability problems (crashes and backflips of the first Sailrocket) while pushing for maximum speed. My calculations confirmed the team's suspicions that we should move the aerodynamic centre behind the centre of gravity, which was not the case in SR1. Now the point of becoming airborne is no longer a problem for the boat, since it retains stability about all axes. We have also designed a new base-ventilated hydrofoil which handles the surface-piercing conditions very stably at high speed with minimum drag.

Q: Aerotrope designed the first wingsail, and now the new improved version for VSRII. Please explain the difference between the two.

The design changed from a conventional boat distribution to a canard distribution, which means we put the centre of gravity ahead of the aerodynamic centre. The wing: We changed from a "symmetric" wing planform to an asymmetric planform, which brings the centre of effort of the wing closer to sea level. This way we could afford a bigger wing while keeping the overall dimension of the boat down. Also, the wing is now freely feathering. Fuselage: We now call the hull a fuselage (as in aviation) since it completely lifts out of the water. The fuselage is pointing at the apparent wind direction, to reduce drag.

Q: Last question: Why did you want to work for Aerotrope?

My passion has always been aviation, but in this sense any object that moves through air in a controllable way interests me. Because Aerotrope is a small independent consultancy I knew that I would have the chance to take on a larger chunk of responsibility in a project, rather than designing a very small part for an enormous aerospace company. The blades on a wind turbine behave in a particular way due to the changing forces they are exposed to, so that is interesting to me. I also really enjoy the variety of projects we work with.